My Journey of Illumination So Far

My Journey of Illumination So Far

It is aptly titled a journey as I certainly find myself in the middle of a quest that would make even Frodo and Bilbo nod approvingly in quiet, Hobbit admiration. But although I have come a long way, brothers, I know there is much more ahead of me than behind.

I do my best to see every day as a gift. The universe knew I would need a deeper foundation to my spirituality as I stepped into this incredible work with M.A.L.E.s and Illuman. I’m blessed and grateful to have gained so many dear friends who have listened intently and graciously given me space to work through and encounter my own darkness, powerlessness, and equally to celebrate the journey of discovering it all at the same time.

My journey of illumination started when my awareness of the tensions of life all around me was not something could ignore or deny anymore. I was in my early 30s when I started recognizing that “Life is hard,” … and it seemed to be getting a lot damn harder. Although I had community, I was performing and touring with a band and keeping myself distracted from the pain of processing a divorce and becoming aware of the fact that my primary fuel was ambition. There were kinks in the emotional department.

Eventually, I encountered an incredible human being who brought much peace, joy and healing, the beautiful, lovely Jennifer. A truer soulmate doesn’t exist. We celebrate sixteen years of marriage this year. She was also a gifted songwriter and musician and we joined forces seeking no less than melodic world domination. Creating, traveling and performing provided an incredible platform for recovery, but yet allowed my false self to grow and flourish. Both of us entrepreneurs at heart, we started a business together and watched it grow with employees and clients ranging from coast to coast. To the shallow self, life was going great. We welcomed our first daughter, Faith, in 2003 and our family began.

A few years later we found ourselves in South Africa doing a two-week run of concerts for relief work organizations. Now, depending on your upbringing, you can classify moments like this as “being in Gods will,” “hitting the ‘mission’ or ‘harvest field,’” or my favorite, “doing what you were put on earth to do.” These seem innocent enough, the lexicon of modern ‘Christianese.’ But the danger lies in our emotional attachments to that kind of language. It can put us in dangerous situations that we’re not necessarily ready for. I can realize and admit now that much of my motivation for faith living was formed around catchy quotes. My theology was mere terminology.

So there we were one afternoon in a large church near Johannesburg. The crew and band were setting up and my wife and I were tuning up guitars getting ready for sound check. Suddenly we noticed that our daughter was gone. Even our caretaker, who had been sitting next to her, did not see her leave. It was as if the floor had opened up. We immediately set out on a frantic search for her in a room of over 1,000 people. The fear, terror, and panic we felt was like no adrenaline rush I’ve ever felt before. I knew she wouldn’t have just wondered off, so I was gripped with the horrific thought that she had been taken. Scrambling through the hallways and classrooms I had a profound Bruce Banner moment anticipating that I would shortly have to kill someone with my bare hands.

In a few minutes my wife located her in the pastor’s office. While we were infinitely grateful to have found her, our entire nervous systems were shot. The notions and ideals we thought we understood were shattered.

I subsequently had a nervous breakdown, followed by a chaser of depression. Nothing made sense after that. The reasons why we were there, why I thought we needed to go, why I even wanted to sing or write in the first place were all questions I could not answer. I experienced mountains of regret. It grew right along with my liquor cabinet. The disillusionment brought me to a powerless place of having questions with no answers. I had grown up in the safe walls of the church and yet I didn’t have the spiritual capacity or language to walk through this.

Our music suffered. Our business suffered. Our state of mind led us into some intense betrayals. We pursued the adoption of our second beautiful daughter, Grace, from Haiti. This led us into the amazing underbelly of child trafficking. I spent the next several years wandering around like a zombie. Like a sleep-deprived zombie. Like a sleep-deprived zombie who was being audited. I was miserable on every level and had truly lost my song, the inner spark. I abandoned music. Thinking about it, making it brought pain.

Then, through a divinely orchestrated encounter, my wife brought home Richard Rohr’s book “Everything Belongs” from a silent retreat. It struck me like no book or writing had in years.

It was truly illuminating to realize that I had spent years assigning value to things, as I methodically classified the secular and sacred—including how to love and accept myself, how the Divine could love me, and how I loved others. I had to deal with the fact that something beautiful could be made by someone who wasn’t spouting Sunday morning rhetoric 24 hours a day.

I have fought against that paradox for a big part of my life—trying to write songs to bring people into the light, because I saw everyone I was singing to as being in the dark.

My dark night of the soul had begun. I was undone. It wasn’t long after that that I found myself dazed and confused, weeping and grieving during the ‘day of descent’ at my MROP at Pilgrim Park in 2012. Amidst a multitude of poignant, life-changing moments from that week, I felt a truly special time happened after I had been drawn and quartered and sent out into the woods as I “came into my own death.” Encountering thoughts and emotions that were too much to bear, I collapsed on the ground. After a short time I noticed that ants and flies were beginning to crawl and land on me. For a while I swatted them away and would shake them off. Then in a pivotal, powerless moment for my journey of illumination, I realized dead men can’t swat off bugs.

The gift of the gentle, quiet leading of the elders and the team there had masterfully prepared me for such a time. I lay there agonizing, fighting, resisting all the things I thought my life should have been, and what I perceived was … wanting to shake off those biting flies. There, on the forest floor, covered with insects, I took my first step into a much larger world. I let go of all my expectations and disappointments. I started down the path of “un-learning.” Believe me, I had years of misguided notions to correct. In the following moments I felt more loved and embraced by the source of all things than ever before.

Shortly after my return we welcomed our third child, a son, Cohen. My children have a different father now. My wife has a better husband. We have recently started playing music again. It’s been a long process, but I seek and strive to live in a contemplative place and to lead my family in a way that can embrace the joy and sorrow, celebration and disappointment that comes at us, and to know that all these can teach us. We’ve gotten daily opportunity to live this out, as my wife has been battling a debilitating disease for several years. I recognize and appreciate that life has chewed me up and I equally know, through these experiences, it will make me a rich and exquisite bite. 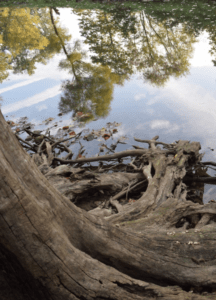